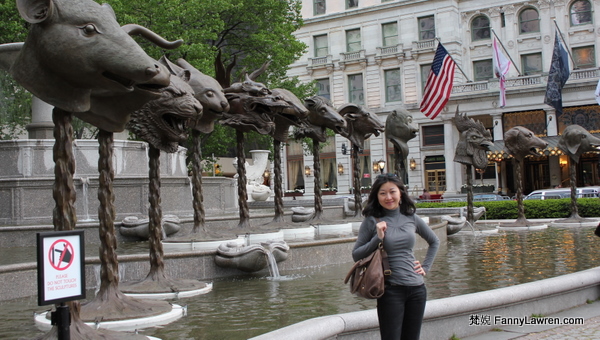 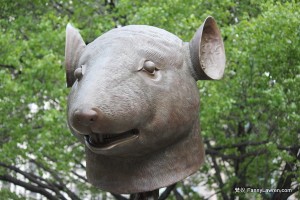 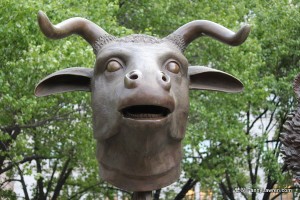 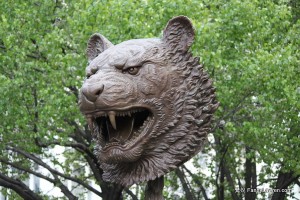 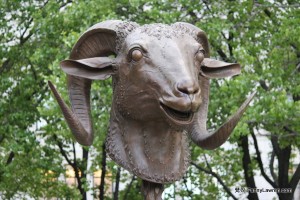 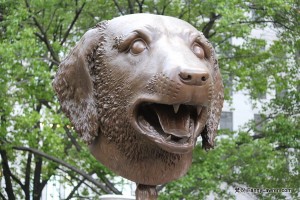 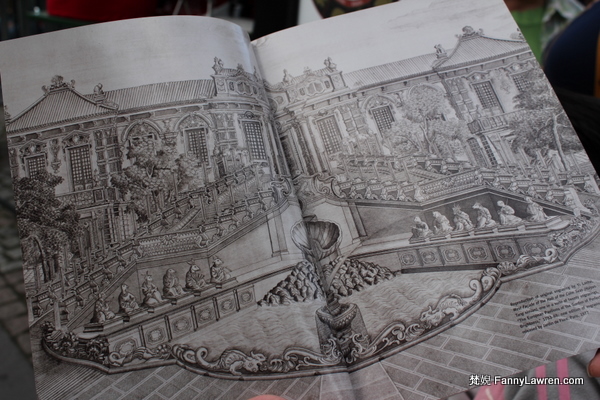 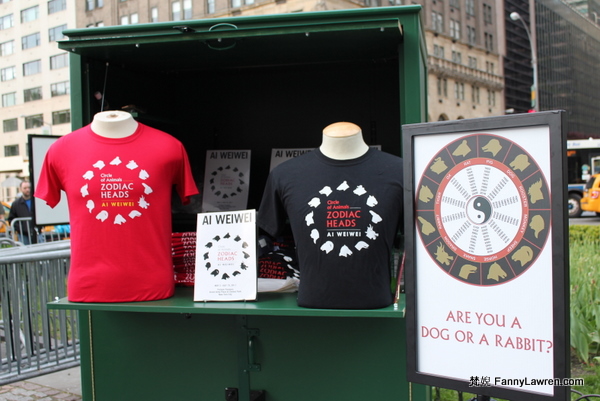 Good morning. It’s a bittersweet honor to welcome you all here to celebrate the opening of a remarkable piece of public art by one of the world’s most creative and courageous public citizens: Ai Weiwei. Ai Weiwei could not be here with us for the unveiling of his latest work, Circle of Animals/Zodiac Heads. He has been detained by the Chinese government, and the fact that we do not know where he is, or when he will be released, is very disturbing.

Today, we all stand in solidarity with the millions of people around the world who are hoping that Ai Weiwei is quickly and safely released. And we stand in solidarity with the billions of people who do not have the most fundamental of all human rights, the most cherished of all American values, and the most valuable of all New York City’s riches, i.e. free expression.（今天，我們和世界上成千上萬的人們站在一起，希望艾未未儘快安全獲釋。我們和十幾億沒有基本人權的人們站在一起，他們還沒有獲得的，正是美國最崇尚的，也是紐約最珍貴的——言論自由。）

Artists risk everything to create. They risk failure. They risk rejection. They risk public criticism. But artists like Ai Weiwei, who come from places that do not value and protect free speech, risk even more than that. （藝術家冒著風險去創作，他們面對創作可能失敗、被拒、甚至公開抨擊的風險；但一個來自不重視和不保護自由言論之地的藝術家如艾未未，所冒的風險更大。）His willingness to take those risks, and face the consequences, speaks not only to his courage, but also to the indomitable desire for freedom that is inside every human being.

New York is a city that fully embodies that spirit and fiercely defends the right of all people to express themselves. Our city is a cacophony of voices – bustling, jarring, provocative. We are a marketplace of ideas, where all are welcome to debate, and argue, and even to agree. For more than 400 years, the best and brightest from around the globe have come here for that reason — and that includes Ai Weiwei.

Ai Weiwei is one of the most talented, respected, and masterful artists of our time. We are honored to be presenting his work. And it is especially fitting that we are the first stop on his exhibition’s international schedule because of his special connection to our City. Ai Weiwei lived here for more than a decade and studied at Parsons School of Design. He is among the millions who have come to our City, drawn by the lamp of liberty that shines from our shores.

The more a city embraces diversity and tolerates dissent, the stronger it becomes. And there is no place on earth that gives freer rein to more voices and viewpoints than New York City. Freedom is our competitive advantage. That is what attracts those with new ideas, big dreams, and fervent beliefs. And it is what makes New York New York.

The defense of freedom existed here in New York City long before there was a First Amendment or even a United States of America. In 1735, a jury of 12 New Yorkers stood up for the right of German immigrant John Peter Zenger to publish articles that were critical of the British colonial government. After being imprisoned for almost a year in New York’s City Hall, Zenger was released, and the free press was born. Our City and our Nation were founded on the principle that every one of us has the right to say what we want, and worship as we wish and where we wish, without any interference from the government.

The 12 distinguished members of our cultural community that you see here today are able to express themselves without the risks that Ai Weiwei has had to face. And the same can be said for the millions more artists, thinkers, writers, and every day New Yorkers who have come here to enjoy this most basic of human rights.

There is much to admire about China and the great Chinese people. Eight years ago Ai Weiwei helped design the most famous stadium since the Coliseum: Beijing’s Bird’s Nest. And like the Coliseum of old, the Bird’s Nest will echo through the centuries and come to symbolize the nation that created it. How that stadium is remembered will depend much on how its creator is treated today.

Freedom’s march is not always straight but it is always forward. And right now in Beijing a young girl is staring at the Bird’s Nest, dreaming her own vision of tomorrow’s masterpiece. And tomorrow a young boy will look up at this exhibit behind us and will begin to create the next great work of art.

Beauty and inspiration are irrepressible; they are alive in every human heart — in every nation — and wherever an artist creates Ai Weiwei is there. And today Ai Weiwei is here. Because even though he could not be here physically, he continues to speak to us, to delight us, and to challenge us through his art.

Circle of Animals/Zodiac Heads is an extraordinary piece of work — set in an extraordinary location. It is the first piece of art to be incorporated into the landmark Pulitzer Fountain. The fountain itself is a symbol of the diversity that defines our City: it was donated by a Hungarian-born benefactor, fashioned by Austrian and Italian-born sculptors from the design of a New York-born architect. It is the perfect setting for a work of art by someone who considers himself both a citizen of the world — and a New Yorker.

In its scale and accessibility, Circle of Animals/Zodiac Heads follows in New York City’s proud tradition of presenting unforgettable public art that everyone can enjoy. Ai Weiwei believes that art should be for everyone – and we couldn’t agree more. Millions of people will see his work – which will be on display here through July 15th. And it will attract visitors from far and wide – as our cultural attractions across the City do. 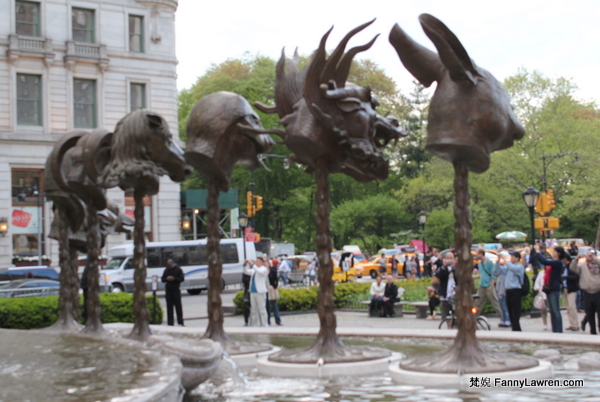